Natali Carrera
Natali Carrera is a devoted coffee addict who also loves her teenage son, her husband of 18 years and shopping small & local. She is the founder & CEO of parent support non-profit Success Together, Inc. and has been a freelance content creator for FresYes.com for 7 years. Natali is a lifelong Fresno resident, unrelenting cheerleader and Fresno State grad.

Oh friends, do I have a tasty story for you! Do you like supporting local restaurants? How about super fresh, healthy foods that are bursting with flavor and offer tons of variety? And convenience, you like that too? Well buckle up, because a brand-new restaurant just opened and I think you’re going to LOVE it!

Mayd Modern Mediterranean just opened in the former Butterfish location on the Palm Extension, just north of Herndon a few doors down from Dutch Bros. Coffee. Modeled after popular, fast-casual Mediterranean-style restaurants that have been popping up in Southern California, Mayd Modern offers a build-your-own bowl main dish featuring some of the healthiest, most delicious options you’ll find anywhere in Fresno. You can make a salad, a grain bowl or a bowl with both greens and grains as a base.

From there, you’ll get to choose your protein/main item (or you can do half and half and try two) such as tri-tip, lemon garlic chicken, tandoori cauliflower or roasted vegetables. (Whether you’re an omnivore or a vegetarian, you’ll find tons of choices that suit your needs.) Next up are tons of fresh ingredients to add crunch, texture, spice and flavor like pickled red onion, olives, roasted red peppers and Mediterranean salsa plus homemade spreads like Fresno chili tapenade or roasted red-pepper hummus. There are also chef-created seasonal salad mixes, a multitude of dressings and sauces, and house-made crunchy finishers to top your bowl with such as roasted chickpeas and crispy falafel crumbles.

In addition to the bowls, Mayd Modern offers customizable Naakos (tacos made with a Naan shell instead of a tortilla), prepared, fresh salads and snacks such as fried artichokes and crispy roasted Mayd Potatoes with roasted kale, garlic and parmesan cheese. Mayd Modern also offers hot plates featuring a crispy chicken sandwich (both a Deluxe and Spicy version) and a Greek-fried chicken plate featuring homemade garlic-ranch dip and crispy Mayd potatoes on the side.

I visited on Mayd Modern’s second day of business and the service was very friendly and everyone was happy to explain the ordering process and different ingredients and options. I ordered a bowl for myself, a Spicy Chicken Sandwich for my son and the Greek-fried chicken for my husband and we all thoroughly enjoyed our meals.

Mayd Modern is owned by the same local restauranteurs behind Butterfish and Heirloom, and you can view their full menu and order online for convenient window pickup via their app. I highly recommend you check out Mayd Modern — it’s something different, new and really special for Fresno.

Chafic Dada and Tommy Caprelian met at a Visalia craft beer event in 2013. Chafic was part of a Visalia family that had opened three Mediterranean restaurants that all featured craft beer. Tommy was from Sanger and had just started making beer commercially—in fact, this was the first event he had brought his beer to.

The two entrepreneurs quickly decided that someday they would partner together on a venture that would combine both of their concepts.

HoP PK is located in downtown Fresno across from the Spiral Parking Garage. It’s a great place to grab some food before a Grizzlies or Fresno Football Club event.

The Dada family had opened Pita Kabob in an old car mechanic shop in downtown Visalia. They were developing a style of Mediterranean food that was an incredible mash-up of traditional pub food with a Lebanese twist (or is it the other way around?). They’d come a long way from the original 1,000 square foot deli that Chafic’s parents had started. His mom began cooking authentic food at home and bringing it to the deli on Fridays. This became so popular they built a commercial kitchen and never looked back.

Tommy Caprelian and House of Pendragon are both products of Sanger. He started his path toward making beer in 2006 and expanded to a brew pub in Clovis, a tasting room at his brewery in Sanger, and now the partnership with HoP PK (this stands for House of Pendragon and Pita Kabob). Prior to opening his own brewery, he worked as the Assistant Brewmaster and was in charge of Quality Control for Tioga-Sequoia Brewing Co. Good breweries always produce great alumni, who continue to grow the craft beer scene. The folks at Tioga-Sequoia are proud of Tommy’s success and they partner together often.

The interior of HoP PK features the downtown Fresno skyline.

HoP PK is located at 820 Van Ness Ave., across from the Spiral Parking Garage. The interior of the restaurant is completely renovated. There is a wonderful wood sculpture of many of downtown Fresno’s iconic buildings. There are comfortable booths, or you can sit at the bar or one of the long community tables. They also have a second floor that can accommodate up to 100 people for private events and parties.

Although HoP PK features House of Pendragon beer, they also have other local beers as well as interesting beers from throughout the west coast. They have specialty beers like sours and saisons, alongside dark beers, lighter pilsners, and lagers. There are 32 taps and you can order a flight of House of Pendragon beer to find the one that you love.

You can get a flight featuring House of Pendragon beers.

The food is incredible. Chafic has a great way of designing a menu to match the wide variety of craft beers. He spends much of his time in the kitchen to make sure that the quality stays high.

The Shawarma Fries are a huge hit. I’m a big fan of the Jerusalem Falafel Pita Wrap. The Mediterranean Flatbread is so good you’ll finish the whole thing in one sitting. And their Pita Chips with either Cilantro-Jalapeño Hummus or Garlic Dip are fresh and delicious, and will be perfect for a casual time sitting at the bar. Finish the night with some baklava—I love the pistachio option.

Along with the traditional choices of lamb, beef and chicken, they also feature vegetarian, vegan, and gluten-free options. They have wine, too! 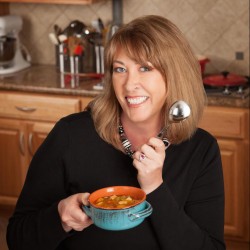 Follow me!
Souper Chef Deb
Souper Chef Deb at Bowl Me Over
Hey - thanks for checking out the recipe! To introduce myself, I jokingly call myself Souper Chef Deb because often times the things I create end up in a bowl - hence the name Bowl Me Over!  I am a serious foodie and have been known as the go-to girl in our family for years, catering weddings and anniversary parties and in the summer help cook mountains of food for our family reunions.  My blog is about food, family, friends & fun. Got a favorite recipe? I'd love to hear about it - have a recipe request? I can help you with that too!

Today I’d like to share another local eating establishment in Northeast Fresno. Ark Mediterranean Grill is located right next to Yosemite Ranch at Champlain & Cedar.  They’ve been open for about a year and half so why we hadn’t been there before?  No idea!

Here’s a bit of what they offer –

What’s not to like?  We started off with their Stuffed Grape Leaves –

The flavors were bright and fresh.  Very lemony and delicious – so yummy!

My hubby ordered a #2 which was a Chicken Kabob Platter – marinated chicken served on a bed of rice (which was amazing!) with hummus and a fresh cucumber tomato salad – it was sooo good!

Along with it was served pita bread.  We shared this meal (meaning my husband ordered it and I picked at it too- he’s a really patient guy! 🙂 ) Couldn’t say enough about how delicious this meal was.  Nothing fried here – everything grilled and fresh.

I ordered a traditional Gyro Wrap and it was also a winner!

Along with the meat it had crisp lettuce, juicy tomato and onions slathered in tzatiki sauce .  We ate a bit of this and took the rest home.

We got to see the meat for our Gyro Wrap sliced off the rotisserie.  Kristina explained building the rotisserie is quite the process!  It starts with marinating the meat, then stacking it on the vertical rotisserie and then slowly roasting it as it turns.

The portions for both meals were really generous.  We had the opportunity to meet the owner Kristina who took the time to explain their process.

Ark Mediterranean Grill prides themselves on authentic recipes and ingredients.  Everything is healthy and grilled (not fried) and ingredients are GMO free. This equals complete deliciousness!

And then we had dessert too!

Baklava is a traditional Mediterranean dessert.  Most often it’s served layered and cut into triangles.  Baklava is filled with nuts, sugar, cinnamon and typically cloves, wrapped in phyllo dough and bathed in butter.  At Ark Mediterranean Grill they roll the dessert – which made it the perfect melt-in-your-mouth bite! You’ll definitely want to grab a few of these!

If you haven’t dined at Ark you definitely need to give it a try!  There is something for everyone vegetarians, vegans and meat-eaters alike!  Everything was fresh and homemade.  The staff was great – very attentive.  It’s a casual Mediterranean Dining experience. The restaurant was so clean and nice.  We gave it two thumbs up!  I hope you give it a try!

Since this is my last share before the holiday I wanted to say Happy Holidays to you! I hope you have a wonderful Christmas and I’ll see you again next week!