You are here: Home / Outdoors / Fitness / How to Arrange Your Mental & Physical Fitness at Old Town Yoga
1250
SHARES
FacebookTwitterSubscribe Never being one for New Year’s resolutions, it was purely coincidental that I tried my first class at Old Town Yoga in Clovis on December 31st.  I had been frustrated with my fitness efforts and, looking for inspiration, decided to try yoga.

Only open for two short weeks, the 650-square-foot studio located in the Saddleback Village center at 325 Clovis Ave. was packed. As owner Desiree Heckman led us through vinyasa (movement with breath to flow from one pose to the next), I felt myself remembering and feeling my strength. Yoga Journal translates vinyasa as “arranging something in a special way,” and I felt not only my physical fitness being arranged, but my mental fitness as well. It was at that moment I was hooked.

The Big Question That Inspired a Yoga Studio

I sat down with Desiree after attending classes for about two weeks to chat about her journey into yoga. Desiree explained that yoga needed to be a part of her system and a lifelong choice—something she did that wasn’t just about reaching an end goal—when she first began practicing. I realized that, without even thinking about it, I had fit yoga into my routine five days a week, so just maybe I was in the right place.

Desiree knew she needed to get into fitness after the birth of her son, so she dabbled in at-home workouts and running. After trying a few yoga classes around town, she found her true love for yoga from a Youtube channel, Yoga 30. After practicing at home, Desiree decided to go for her teacher training in January of 2016. The studio she used was The Yoga Room in Redlands, Calif., whose owner, Daniel Head, had been one of Desiree’s favorite teachers from Yoga 30. She dove into her training, which consisted of one weekend a month for nine months.

While thinking that owning her own studio would be a long-term goal, Desiree was inspired by an interview on one of her favorite podcasts, The Tim Ferriss Show, where this question was posed: “What’s keeping you from accomplishing your five-year goal in six months? The answer is usually you.” So, in the midst of her teacher training, Desiree decided that Old Town Clovis needed a yoga studio.

She began to gather with friends in the park to practice. “I was very open with them and it helped people connect with me early on. I was never trying to be someone I wasn’t. I would tell them, I’m teaching right now and I don’t know what I’m doing. Come out, please. You’re doing me a favor.” This openness is still true of her teaching style today. Desiree welcomes each member to class with open arms. Whether a beginner or advanced, you will feel challenged and encouraged. A Studio is Born

Over the next few months, Desiree was able to see private clients and even hold groups for employees during their lunch breaks. After calling a local gym to see if they could use her as a sub, Desiree was asked to teach a permanent class. Still not feeling at home, she faced her fears and decided to take the plunge into small business ownership. With the support of her husband, Andy, she began looking into spaces and found the location of their studio in September. Doors continued to open for them and they were literally opening their doors for business by early December.

Desiree started the studio teaching classes alongside a fellow yogi, Crystal Uyeno, whom she had met while practicing locally. By January, Old Town Yoga added two additional teachers, Heather Kane and Corie Lyons, to accommodate more people and offer more class times. The instructors have a true passion for yoga, for people, and for community. Yoga may not be everyone’s perfect fit, but it is definitely worth trying— especially since OTY is offering a two-week trial for just $30. As they continue to figure out what works best for class times, level options, etc., Desiree and her fellow instructors are constantly encouraged by members like mother/daughter team, Danielle and Donna, seen in the photo above. When the photo was taken, it was mom Donna’s first yoga class ever. Several classes, calories, puddles of sweat, tears, and laughs later, they are both hooked. “Literally life changing,” says Donna.

The most important thing to remember is this quote from Dr. Judith Lasater: “Yoga is not about touching your toes, it’s about what you learn on the way down.” 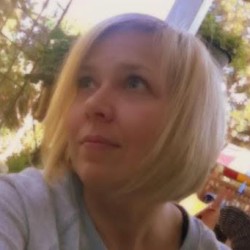 Follow
Tamera Shoemaker
Garden Blogger at FresYes.com
Forget the Beach! Tamera prefers to soak up the valley sun in the garden. Tamera's love for gardening began 13 years ago after moving into her first home with her husband, Dave. A Clovis native with deep roots in the valley, she has worked for several local nurseries guiding her clients to the right plant for the right spot. With an emphasis on hospitality, Tamera thrives on helping others create an inviting garden that gives joy to the gardener and their guests.
You can find Tamera working part-time at Evergreen Garden Center or trying to keep up with her 2 girls.