The Fresno Art Hop via Bicycle?

So let me start by saying that I believe that I am the most uncoordinated person that lived on this earth. I can’t play sports, I don’t dance, and I definitely don’t bike around Fresno streets. Well, until last night when I attended the August Bike Hop event.

Held on the first Thursday of every month, Art Hop is an event that has been going on for some time in Fresno. Different venues throughout the city open their doors for individuals to display their art to the public. Like many others, I have attended Art Hop by driving from venue to venue and enjoying the art. A friend of mine asked about a month ago if I had heard of Bike Hop. He said that it was the same premise as Art Hop but on a bike. So of course, this most uncoordinated girl in the world said, “Heck yeah!  Let’s roll!” The group meets at Fresno High on the day of Art Hop at 6:30 pm with a departure time of around 7 pm.   As we raced to get there on time, we pulled up to a group of people waiting for the days adventure to begin. Music was blaring, people were greeting each other, talking about the days events and what was new in all their different circles. I meet my friend John, who promised to not let me fall and protect me from slamming into parked cars. Thank God. Little after 7 pm, we were off. Now, let me start by saying that many people had their bikes totally decked out with lights, bells, and whistles. One person had a sweet, loud stereo attached to his bike on a rolling cart, providing a bit of tempo to my lack of pedaling skills. When we were rolling down the street, there was no mistaking we made our presence known; even the kids were waving at us.  As we passed intersections, different people in the group made sure that they stopped traffic in order for the group to safely cross. Our first stop was Gazebo Gardens.

The group parked their bikes outside and inside of the venue. Some in the group keep an eye on the bikes and another person is in charge of letting the group know how much longer we have before we leave to our next stop. I have written about Gazebo Gardens and my enthusiasm for this place in earlier blog posts. Tonight it was added to the Art Hop scene for the first time with some incredible art displays.

Next Bike Hop stop, Peeve’s. I jumped on my bike, prayed, and we were off. I have to say, once I got over the idea of a catastrophic fall, it was such a blast. The group just had this great energy and vibe. Plus it is a totally different experience to ride your bike into downtown. You have this chance to really look around and see the amazing buildings that line the street on the way to Peeves. We arrived, I grabbed a water, and enjoyed the art.

Next stop, Tioga-Sequoia Brewing Company. In honor of national IPA day, I did grab my one of my favorites, their Citrus IPA.   A DJ was blaring in the background and the Bike Hop group mingled around. I talked to a few of the amazing artist that were representing their art there and met a few more of my fellow bikers. Before I could rest my out of shape legs, they announced that we would be rolling out.

The last two spots were Broadway Studios and the Art House. Broadway studios is a small community of individual art studios that are opened up to the public during the Art Hop nights. You are allowed to walk right into their personal space and see all this amazing talent.

The Art House was our last stop. An open space that with a variety of displays and a live band playing was packed with people. But alas all good things must come to and end, and this is where mine did. So John lead the way as we peddled back to our original starting point.

Now I have to say I had so much fun doing this. It is something that is totally out of my comfort zone, but I am so glad I ventured out. The group was so welcoming and the vibe was just like a big rolling party.

So if you really want to go experience Art Hop in a totally different way you should definitely check this out next month. Don’t forget to have some lights on your bike, some water, and openness to having a good time. Most importantly you get an opportunity to see the amazing talent that exist in Fresno in many of these galleries.

I can proudly proclaim that no writer was injured during the experiences that lead to the writing of this article.

Thanks John for taking many of the pictures and allowing me to keep both hands on the bike at all times.  Amen!

Need a little more? Here’s a video from last year 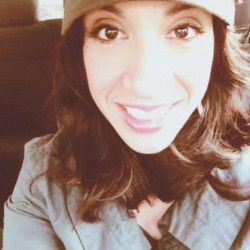 Cecilia Ballesteros
Cecilia is a school counselor and a mom to a 12 year old son. Loves a good beer, a slice of pizza and interesting conversation.Although not born in Fresno, Cecilia has made this her home after living all over this great state.She loves to find the amazing things to do in life near and far and meet the amazing people that make it happen everyday.Loving it all the way.